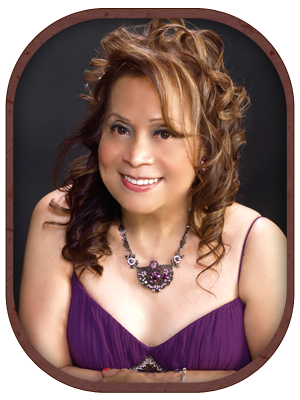 Olivia Villa-Real is a singer, pianist, composer and writer who combines her artistry in music with her passion for writing. Hailing from the Orient, the Philippines, she infuses her music with the sensitivity and sentimentality that permeate the Asian culture. However, growing into the fullness of womanhood in Los Angeles, the melting pot of different cultures, her music has been transformed into an amalgamation of Asian, European, Latin and American sentiment and rhythm. She believes that our current-day music, though rich in rhythm and vivacity, needs a depth of feeling that appeals to the human soul. Music is the perfect vehicle to communicate our value system to the masses. The lyrics, if delicately embedded in the music that supports them, go straight to the heart and poignantly move the human spirit. What better means can the human mind communicate with others in its efforts to touch their hearts and move their spirits, than in a language so powerful and universal as music? She started her piano studies at the tender age of five and was winning competitions and playing with orchestras at age twelve. While singing in a church service, she was spotted by someone who was instrumental to her winning a scholarship in vocal performance. Her vocal studies led her to the discovery of a new realm of music-–the opera, oratorio, lieder and art songs. Imbibing these classical influences, along with the everyday language of pop music, she developed her own style of singing and composing along the lines of pop music with classical overtones, in an effort to bring to the common mass the richness and beauty of classical music.

“During my childhood,” she recalls, “I had the opportunity to take care of the poor, the old and the sick in my neighborhood. I feel so blessed to have had such opportunity because such experience has allowed me to develop the sensitivity and compassion for the plight of the poor and helpless in our society. I felt a special bond with these people. And the love, the friendship and the appreciation they gave me in return-–so genuine and precious–-I have kept deep in my heart to this day.” Compassion for the poor is a driving force that is at the core of her music and her spirit. Ardent in her desire to help others who are less fortunate, she was propelled to do a solo concert at the Dorothy Chandler Pavilion to benefit the homeless of the Union Rescue Mission. This was what drove her to join a church group that delivered over a thousand sandwiches per week for two years to the poor and homeless on skid row. She says “Empty is the gaze of a man numbed by pain. Look into his eyes and search for his soul. If we tarry much longer in responding to his call, we may not find it there as the light of hope in his heart recedes into but a flicker that may soon dwindle into nothingness. I ask, therefore, with the deepest stirrings of my heart that we all may become the wind beneath the broken wings of the poor and less fortunate in the shadow of despair.”

An accomplished singer, she sings in a wide variety of languages– German, French Spanish, Portuguese, Latin, English and in three Filipino dialects. She has performed in many concert halls in the United States and abroad, including two major solo concerts at the Dorothy Chandler Pavilion of the Los Angeles Music Center. A holder of a Bachelor and a Master’s degree in English and in Music, she has 68 musical compositions (words & music), a novel (The Velvet Thorn), a collection of poetic prose and poetry, (Murm’rings of the Heart), a treatise (A Critical Study of Ernest Hemingway’s Philosophy of Meaningful Existence) and a line of greeting cards. She teaches Piano and Voice in Eagle Rock, Los Angeles and belongs to the Music Teachers Association of California and the National Guild of Piano Teachers. She is also a member of the American Society of Composers, Authors and Publishers, American Guild of Variety Artists, Screen Actors Guild, American Federation of Television and Radio Artists and American Federation of Musicians.